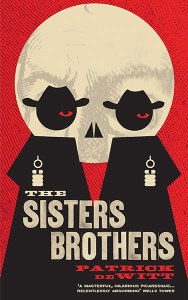 Are Westerns on their way back? There have been some great films in the last few years making use of the icons of Western tales and adding a light(ish) sprinkling of modern sensibility – “The Assassination Of Jesse James By The Coward, Robert Ford” and the Coen Brothers’ remake of “True Grit” come to mind. There are probably others.  May need to come back to you on that.  Maybe they’ve never been away. Whatever the case, it was a grit-chewin’, barn-burnin’ pleasure to read Patrick de Witt’s “The Sisters Brothers”. The Metaphysical-Comic Cowboy novel is possibly a rather niche genre – but I don’t mean to damn with faint praise when I say that, within that field, this novel must be way out in front.

The time and place are the far West of Oregon and California during the 1850s, but there’s a stripped down everywhere and everywhen-ness to the book that carries it along at a cracking rate – especially when the fun-size chapters are taken into account. Our narrator – and possibly an overly reliable one – is Eli Sisters, a reluctant gunslinger and wingman for his professionally and personally uber-violent brother, Charlie. Together, the Sisters Brothers are on the trail of a man called Hermann Warm, tracking him down at the behest of the mysterious Commodore, a criminal mind whose presence hangs over the novel but who is not glimpsed until a powerful denouement involving a bath tub.

In their journey to hunt down Warm, the Sisters Brothers amble and tumble through a variety of misadventures. At first, it felt like this would be an averagely diverting, revisionist, comic Western – with that slight whiff of condescension you get on sensing that a Proper Literary Writer has decided to go downtown and slum it amongst the quaintnesses of a popular genre. An encounter with a man who has failed at everything and finally turned to frontier dentistry, and another with a backwoods witch, mean that it feels like enjoyable, if inconsequential, picaresque fun for the first fifty or so pages – but the sense of something much larger being kept in check beneath the narrative – something genuinely mythic and unsayable – kept me reading.

A lot of this came from Eli. As the brothers proceed in their clumsy, violent misadventures, Eli begins to question more and more what this is all about. But he’s no simple gunman with a conscience. He is an articulate, sensitive and tender-hearted soul. He has body-image issues and would like to lose weight. He has a complex relationship with his older brother. He is trying to work out for himself nothing less than an exact sense of where he stands in life and by what means he can live at peace with the universe. He has a slightly rubbish horse called Tub for whom he feels great tenderness. Gradually, this novel becomes spellbinding.

The mix of comedy and pathos is the key. Magic Realism now feels as quaint as – well – Social Realism. Clever-clever post modern tricks not only fool no-one nowadays – they pretty much don’t interest anyone, either. Well, certainly not me. De Witt creates a novel that has moments of outstanding comedy balanced against passages of surprising tenderness. I’ve no particular interest in caring overmuch for animals and feel a vague distrust for anyone I suspect of lavishing more emotion on them than they do towards human beings – but the passage where Eli realises that he’s going to have to leave Tub behind is a small-scale heartbreaker and the best Maudlin Creature Death Moment since Boxer bought the (Animal) farm. This comes after his failure to ensure some reasonable treatment for the beleagured horse leads to one of its eyes being scooped out in a relishable passage of Wild West veterinary work. Eli’s worried, introspective, self-questioning narration offers everything to you at just the same size. Moments of high comedy are followed by sudden road-bumps of violence, presented bluntly and driving home a sense of a world in which moral choice, fun, loneliness, neglect, crime, tenderness, trust, hope, brutality and dignity are up for grabs at every instant. Eli’s struggles to find love, assert a moral code for himself, get rich and get out of the outlaw life, lose weight and care for his horse feel completely immediate and local, as well as full of larger significance. I’ve seen reviews comapring “The Sisters Brothers” to Don Quixote. Big claim; entirely justified.

The final third of the book is the best of all. There’s a slight wading into magic realism as the Brothers, having found Warm, become involved in a scheme to use what’s effectively a magic potion to illuminate the gold hidden in a river bed. It should be hokey and annoying but it’s completely compelling and leads to a conclusion that reflects what’s so brilliant about this book – it manages to be both beguilingly dreamlike as well as horribly smothered in dust and guts and blood. (Seriously – there’s a great deal of dismemberment and disfigurement in these pages).  Like many great Western stories – say, “The Searchers” or “The Treasure of the Sierra Madre”- this book is a brutal fable about people with enough space cleared around them and what is revealed when you can get away with making laws for yourself. If anything, I’d have liked 50 more pages at least spent with the fantastic character of Warm – a man who has been on his own American odyssey  during which “I was the raving and maniacal village idiot, in short, only the village was not a humble, thatched-roof township, but the United States of America.” His story just about merits a novel of its own. “And if there is a God he is a son of a bitch”, Warm tells Eli, summing up the fine-line-between-comedy-and-tragedy this superb novel walks. It didn’t win the 2011 Booker Prize. Shame. But it’ll make an amazing film, in the right hands.

I teach at Trinity School in South London. But when I'm not doing that, I like to read. Rather a lot. Once, years ago, I overheard my Dad describing me to someone as "A terrible one for the books". Hence the name.
View all posts by aterribleoneforthebooks

A Terrible One For The Books

A Terrible One For The Books